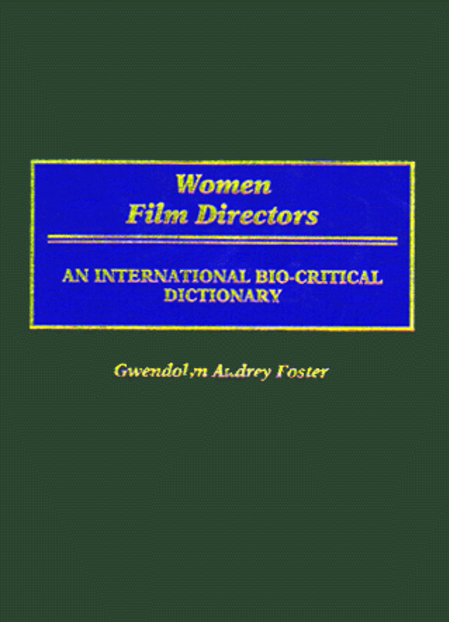 Click here for a complete index to this book.

Women Film Directors: An International Bio-Critical Dictionary includes incisive theoretically balanced critical essays, filmographies and bibliographies of many women directors who do not appear in any other film encyclopedias, especially women filmmakers of color, such as Anglo-African filmmaker Ngozi Onwurah (The Body Beautiful), and African/Indian lesbian Pratibha Parmar (Warrior Marks).

One of the key features of the book is the foregrounding of women avant-garde filmmakers such as Beth B., Storm de Hirsch, Holly Fisher, Jill Godmillow, Yoko Ono, and Monika Treut who have made significant yet often overlooked contributions to the development of film as an experimental film medium.

Foster also highlights the films and careers of many early women directors such as Margery Wilson, Ida May Park, Dorothy Davenport Reid, Hanna Henning, Gene Gauntier, Grace Cunard, Julia Crawford Ivers, and Ruth Stonehouse,  who often directed, produced, wrote, acted in (and performed stunts) for their own directorial efforts in the exciting first decades of the dawn of cinema.

"This important work compiles a significant amount of otherwise difficult-to-find information on women filmmakers working in all countries and all contexts, whether mainstream, independent, or experimental/avant-garde. The introduction, which gives generous consideration to a wide range of scholarly contributions, is an excellent synthesis of writing in English on women directors. Public and academic libraries with any interest in film will want to acquire....[W]ill appeal to all types of readers." - Library Journal

"This is one of the most complete volumes on the topic, covering the careers of almost 200 women filmmakers, commercial and avant-garde, who created fictional narrative work (rather than documentaries). The author includes directors from around the world but admits that Western filmmakers are more often documented. She makes a serious effort to include many minority directors. Foster's lengthy introduction shows how female directors have influenced the industry--and other female filmmakers. Each main entry includes critiques of major films, an occasional mention of career paths, a selected filmography, and a bibliography." - Booklist